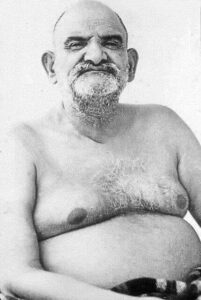 If you even partially believe the stories of Neem Karoli Baba,
you will come to realize that Maharajji is as alive now as He ever was. The being described in the stories of Maharajji is not capable of dying. He is always here on Earth, in one body or another. Maharajji
is “spirit.” It was told to me some years ago, that Maharajji has been on Earth over 2,000 years. He simply “leaves His body” when it gets old, then gets a new one.
Maharajji once said, “The body has to finish.” Usha Bahadur
narrated that shortly before Maharajji left His body, He said to Usha,
“Soon I will get a new body. This body has become very old.” Usha
laughed. She said that it never occurred to her that Maharajji would
actually leave the body.
Just because you cannot ”see” Maharajji does not mean He is
not there. For those to whom Maharajji is the Guru, He is always felt.
Once He has gotten hold of you He is always there with you. If at
any time you do not feel Him, then simply get quiet, calm your mind,
cease activities, pull yourself out of the illusion of your day and open
to feeling Him there with you, and you will come to realize again that
He is there.
Maharajji was not simply a person. Maharajji is “a Force,” an
Immortal Force of Love and Good. Maharajji is the greatest enigma
of human kind. It seems He manifests in different bodies or indeed
the same body in various eras. He was also caught many times
being in several places at the same time. I once stood on the second
floor in the back of Maharajji’s Vrindavan Ashram1 with Kabir Das
and Shivaya Baba. They laughed and said, “It is so strange that they
built a mahasamadhi temple, on the spot where Maharajji’s last
known body was cremated, when there is ample proof that Maharajji
had several bodies.”

It All Abides in Love
In Search of the Science of Maharajji
By Jai Ram/ J.r. Ransom

The Family ManGetting Here from There Rameshwar Das