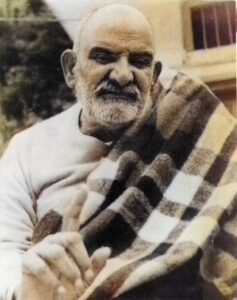 Maharajji did so many of these Lilas as teachings, as examples that would go into the books of stories about Him. Maharajji never really gave teachings, as such. He never really sat down and gave lessons. His teachings were examples that people would learn from because of having experienced them. It has been said that Maharajji did not give formal teachings because no one could truly hear him, because no one truly understood.

Someone asked Maharajji why he didn’t give teachings (I assume, he was asking why Maharajji didn’t give “lectures”). Maharajji asked various people around His tucket what they were going to do the next day. They gave answers that described their usual day of mundane activities of work, etc.. Maharajji then pointed out that each person already had a program of what they would do with their lives planned out and nothing He could say would change that. Maharajji is certainly working in His own way rather than the obvious method of giving lessons to devotees. Nevertheless, Maharajji could and did indeed change the destinies of His devotees. It is His play to refute His ability to teach anything. Maharajji expressed many teachings directly to devotees. Maharajji was and is teaching His devotees even now long after His last known body was cremated in Vrindavan so many years ago.

The answers are given in the thousands of individual stories of Maharajji’s Lila. They are the teachings – by example. Each story of Maharajji’s Lilas is worthy of contemplation in much the same way as a Zen Koan3. Each story has a message for His devotee. Maharajji taught in this way. There is much to learn from these stories and many are worthy of your deep contemplation and should be long remembered and often remembered. Devotees of Maharajji will find it very helpful to frequently use bits of the teachings in these stories as signposts and gentle reminders as they tread along the spiritual path of their lives. Each quotation of Maharajji is certainly worthy of the same contemplation.

Of course Maharajji used these sorts of Lilas as a teaching tool. Maharajji was riding in the back seat of the car. Gurudat Sharma was riding beside Him. There was a driver in the front and also another man. Sharmaji is a very proper Brahman. He always does his practice in silence. However, this time he suddenly began to sing “Sri

Ram Jai Ram Jai Jai Ram” very loudly with his voice. Maharajji immediately yelled at him saying, “Do your practice in silence.” Gurudat claimed that Maharajji had caused him to sing like that so that He could give instruction to the passenger in the front of the car. Thus Maharajji was able to instruct this man through a little drama.

The core of the perception of Maharajji is the Lilas. The Lilas are Maharajji’s use of the powers of the unseen physical and non- physical to manifest on the physical. Everything about Maharajji is Lila. If you are conscious of having entered the Lila of Maharajji, you know exactly what is meant by this.

It All Abides in Love

In Search of the Science of Maharajji