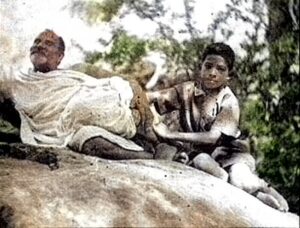 The devotees of Maharajji in India believe that Maharajji is the direct manifestation of the Hindu God Hanuman. There is a story of Maharajji wherein He appears to Dada as Hanuman in such a way that He seems to have blown Dada’s mind out for some time. In one case Maharajji was speaking about Hanuman and referred to Hanuman saying the “I” pronoun in place of Hanuman. There is a story where Maharajji’s palms and soles of His feet turned red like Hanuman. Also cited are stories of how much Maharajji loved to climb in the trees, and there is in fact a tree remaining in Akbarpur4 that the villagers say Maharajji frequently climbed.

It All Abides in Love

SadhanaThe Lilas Are the Teaching